The key thread that runs through all my research is attention to crisis and routine. I interrogate throughout my research agenda how and when “crisis” manifests—in language, discourse, narrative, and experience—and the ways crisis is either routinized over the longue durée of time or history, or when it encounters routine itself. Both crisis and routine are common descriptors, especially in this current pandemic age when the crisis of a global pandemic became routinized into daily living for most of us. My approach to something like the Covid-19 pandemic, for instance, is to explore where those lines of crisis and routine fall, under what conditions, in comparison to what historical precedents, and for what purpose.

Life Despite Security. In my book manuscript, I contend that routinization enables South Korean citizens and the state to treat domestic minorities, especially queer and trans people, as national security “threats.” Korean national security is rooted in Cold War era external threats, namely encroaching communism and a North Korean invasion. Yet in the age of “the War on Terror,” national security encourages citizens to interpret their daily lives through the discourses of security. South Koreans live under conditions of banal security, conditions which allow internal, national others to be marked as destructive and threatening. The experiences of queer and trans people reveal how this process functions as the state and citizens correlate them to a diversity of assumed deadly and violent threats: not only North Korea, but also terrorism and even viruses. The amalgamation of such threats engenders new matrices of social relations and solidarity that challenge the contours of the nation.

I conducted twenty-two months of fieldwork with queer and trans activist, LGBT health, and human rights organizations in Seoul. I investigated the intimacies of national security played out at the everyday level, demonstrating how national security is a self-making process for citizens and a method of organizing sociality. My approach is as an ethnographer, theorist, and activist. I thus traced the valences of national security law and discourse in everyday practice. This included attending Constitutional Court hearings that used the threat of North Korea to ban “sodomy” in the military, witnessing increased state policing of queer spaces following the outbreak of the Middle East Respiratory Syndrome (MERS), and observing anti-LGBT protests that compare queers to Islamic terrorists. I also critically engaged with queer and trans activists and human rights lawyers combating continued legal, social, medical, and cultural discrimination. I show how citizens produced forms of national security in their daily life, practices which interwove security with gender, citizenship, and ethnicity. Activists, meanwhile, constantly work to transform these connections. They take threatening relations and reformulate them to make them productive in their work and lives. During the 2015 MERS outbreak, for instance, activists advocated for cohabitation and relationality of infected and non-infected to combat the epidemic rather than state encouraged isolation and social distancing practices. This is the activists’ form of queer fugitivity.

My book is the first ethnographic study to explicitly analyze national security practice through queer theory and social justice. As such, my research makes interventions into anthropology, queer and gender studies, East Asian studies, and studies of the nation-state. By examining the relationship of daily life and security governance, I demonstrate how the state engenders creativity, possibility, and non-normativity that challenges national security paradigms. Similarly, I explore how new practices of kinship, social relations, and the body emerge when queer people are brought into relations with other threats. 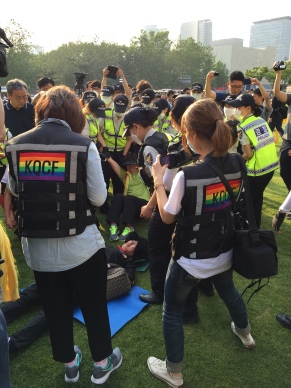 Queering the Surveillance Assemblage. The thread of crisis and routine also emerges in my current project, sponsored by the SSRC Rapid-Response Grant on Covid-19 and the Social Sciences, which examines the production and perpetuation of homophobia in South Korea’s mass surveillance technologies during the Covid-19 pandemic. This collaborative project with Wonkeun Chun at Jeju National University interrogates the effects of South Korea’s Covid-19 pandemic response on the Korean nation, governance, and citizenship. It specifically examines the mass surveillance technologies and techniques that deliberately target the non-normative behaviors, lifestyles, and practices of Koreans. These technologies include mandatory testing, collecting financial data, mapping social media data, tracking mobile phone GPS, and reporting the details of infected individuals to the public.

This project, however, explores the social costs of this surveillance assemblage. It examines the case study of the May 2020 Covid-19 outbreak within Korean queer communities and the homophobia and discrimination that swiftly followed. This outbreak began when a Korean man visited a series of bars and clubs in the Itaewon district of Seoul on the first night of re-opening. The man later tested positive for the coronavirus, but when the media reported on the case, some included the names of the clubs while others labeled them as gay clubs. As the number of cases increased, Korean citizens and news agencies started targeting queers and their “immoral practices” as the latest viral vectors. Some citizens have even taken to publishing personal information of suspected queer patients online.

This project details how the surveillance assemblage charged with tracking and mapping viral infections is predisposed to facilitating and cultivating homophobia and discrimination. It investigates the technologies and techniques themselves alongside the work of activists in order to demonstrate how the surveillance assemblage crafts normative bodies by targeting the non-normative ones. Not only are the data collected crafting an image of this person—his behaviors, his practices, his lifestyle—but given that the government then shared much of this data with the general public, that image of the person and all that he embodies was refracted through public sentiment and morality. This project therefore enacts analytical contact tracing to map the constellation of interests, peoples, institutions, and discourses involved in the surveillance assemblage. By dissecting the technologies and following their usage, this project examines the nodes of the assemblage, from the government and public health workers to the infected, activists, media, and the public.

The Viral Imaginary. My next project interrogates the historical layering mobilized in Asian discourse (popular culture, media, ethnography) of the concept of “the virus” as routine or “the virus” as crisis. By analyzing these reflections of viruses alongside the ways people respond to them and contribute to what I call the viral imaginary, I query how historical parallels are used to narrativize the virus. This makes “the virus” a knowable entity. There are multiple narratives of the virus, and in the moment of crisis there is a heightened question of which repositories of the viral imaginary people will operationalize to interpret and know the virus. There are moments when the virus is framed as a crisis, especially when understood through the lens of pandemics and epidemics. Yet there are other moments when viruses are routinized, when calls for co-existence dwarf those of fear. I investigate when and how these historical references are remembered and used, signaling what people notice in each viral iteration.

Central to this project is the movement between routine and crisis and the ways crisis becomes routinized. The temporality of crisis is also a source of a temporality of its historical memory. The work of crisis signals when norms are challenged and thus creates a narrative form to make that historical object of crisis knowable. Epidemiological investigations into the source and conditions of viral outbreak index how crisis constructs narratives of bound temporality: epidemics and pandemics are contained moments and memories juxtaposed to non-viral times. Supplanting the routine of viruses for crisis also encounters the way routinizing crisis is a historically contingent project that happens over time.

Epidemiology is important in this process in addition to the actual epidemiology of the virus, which assists in knowing the virus. Here is where Asia provides an alternative model for a historical imaginary: rather than being a distant memory mired by non-viral crises of war and economic depression, viruses in Asia entangle recent history into the present. From bird flu in Vietnam and SARS in Hong Kong to MERS in South Korea, viruses are much more present and prescient in Asian historical memory. Therefore, analyzing representations and narratives of the virus in Asia indexes a far more generative intervention into the social and cultural dimensions of viruses globally.